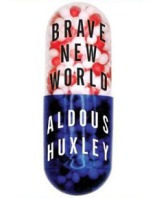 I figure that in Huxley’s Brave New World,I would rank as a Beta-minus, on the scale from Epsilon-minus up to Alpha-plus.  Not on the basis of my intelligence, mind you, but on examination of my status in society and the nature of Huxley’s dystopia.  Hmm…maybe I should exit for 1984.

It has been eighty years since Huxley’s satire was published, and it remains fresh and entertaining, and sharp, precisely because it was written as a satire, and not an attempt at ‘science-fiction’, which hardly existed as a genre in that day.  Of course, he was remarkably prescient on some points, genetic engineering, before genetics was even developed in its modern form, for example, but that’s a small thing next to his wicked skewering of industrial-consumerist-ideology and religion.  The people of his future world worship Henry Ford, swear by him, “By Ford!”, and display ‘T’ pendants (for the Model T, that is) everywhere, conveniently similar to the ancient Christian cross.

Huxley gets in a sly observation about the literary history of cults and religions, the way that popular culture and orthodoxy twist and mold the facts of history, when he remarks on Ford and Freud.  Freud too, is revered in the new world, but his name is unknown.  His ideas are assumed to have been those of Henry Ford – how could two such moral and mental giants have existed?  Scholars, exegetes, and philosophers have simply determined that Ford, when he spoke of matters psychological, chose to speak under the name of Freud.  The prophets have their ways.

The book is marvelously funny, and the device of having Mr. Savage, a visitor from the ‘uncivilized regions’, speak constantly in Shakespearean verse, a result of his compulsive reading of the only book he has ever seen, is wonderful. Sometimes, I feel exactly the same way when I read The Bard, i.e., that the glorious quality of his words is somehow an ironic comment on, and critique of the world I live in.  It also provides a frame on which Huxley can hang his implied and explicit speculations about culture, civilization, and politics – always the weakest point in any of his books.

Despite his brilliance and originality, Huxley always seems to me to be tip-toeing through the muck of modern culture: shocked and appalled by it, and so concerned that it not dirty his clothes.  How paltry all this is, he is thinking all the time.  Oh dear, nobody has time for real culture, but these…ordinary people…are so interesting at times, their pastimes and songs, and whatnot…  For me, his work’s appeal is limited by the fact that it is that of a man who never quite shakes off the upper-class twit aspect of his social background.

All the world’s a stage

Ignatz fashions himself a boomerang brick and shows it to Officer Pup.  Ever mindful of Krazy’s welfare, Pup “get’s rid of it” by hurling it off a magic mesa.  From that point, or even before, we know what will happen, and here it is in the image above.

Somehow, without explanation or comprehensible mechanism, the scene has shifted.  This primal drama of love, longing, and anxiety is being played out…on a stage!  See the boards, the curtains drawn aside, the lamp?  And Ignatz, like the character in Bunuel’s Discreet Charm of the Bourgeoisie who suddenly realizes that the dinner party he is attending is in front of an audience, catches the situation and tries to apprise Krazy of it.  “Pssst…let’s go!”  Pup will suffer the dramatic consequences of the prologue, and they don’t want to be around for it.

As they make their escape, the theater seems to have disappeared, or is it always there?  May I paraphrase Marlowe’s Mephistopholes in his response to Faust, who asks him, “Tell me, where is this place that men call hell?”

The Stage hath no limits, nor is circumscrib’d one self place; for where we are is our stage, and where this stage is, there must we ever be.

I have noticed ads for this risk management outfit on my daily commute, and I think they are a good example of what cranky cultural critics of a certain age refer to as middle-brow degradation of culture. The ads have simple black and white images with quotations that will seem familiar to readers with some education. The fun comes when you think about what some of them actually mean…

My favorite shows a close-up of a woman in an image similar to the one here, with the words, “To risk, perchance to dream…” Oh, wow, an allusion to Shakespeare, Hamlet no less! By associating part of the cultural canon with their pitch, they give it tone and credibility. This sort of thing is rampant in magazines and newspapers now, as copywriters struggle to make each headline a catchy allusion to some part of the great subconscious cultural reservoir. The Village Voice was a pioneer in this, I believe, and even the NY Times, particularly the Sunday Times, has adopted it.

Oh well, too bad that when the Melancholy Dane was saying these words, “To sleep, perchance to dream..,” he was weighing not the advantages and risks of an afternoon nap, but the relative merits of committing suicide as a solution to his problems.

Sometimes being picky is fun.