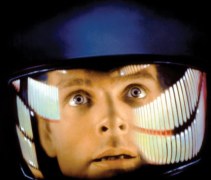 Apollo 13 tells the story of the unfortunate NASA mission as a straightforward disaster tale, anchored by Tom hanks as Jim Lovell, the resolutely understated hero.  I consider this part of my examination of The Engineer as Hero in movies:  a lot of pilots and astronauts are engineering graduates, and Houston Mission Control is a hive of that species.  Hanks plays the hero in Steve McQueen mode, but more approachable.  His values are rooted in family, and he reveals a streak of spiritualism when he recounts his lucky escape as a fighter pilot, “lead home” by a trail of phosphorescent algae in the wake of his mother ship.

The film was entertaining, but for me, ultimately a bit dull and flat: I am not engaged by celebrations of folksy heroism, and the fascination of space was lost in the Hollywood adventure story of man-and-machine, despite the commendable restraint exercised by the film maker.  Although this is clearly a celebration of  an American Everyman’s triumph, he leaves the sentimental gushing for the musical score and Lovell’s mother, who, on cue, declares that if “they could make a washing machine fly, my Jimmy could land it.”

I grew up watching space launches, building models of the LEM, and hearing the roar of what we thought were engine tests at Rocketdyne, in the industrial section of the San Fernando Valley. The gadgets and the stories were neat, but for me, the essential terrifying strangeness of space was what fascinated me.  David Bowie captures it in his song, Ground Control to Major Tom:

Just guys floating in the cosmic void, protected by a little tin can. Ron Howard has made a movie that could have been on an ocean liner, a mountain top, or an airplane coming in for a dangerous landing.  The archive footage of Walter Cronkite’s wonderment at the moonwalk conveys more of the magic of the enterprise than anything else in the film.  2001 is still the standard for man in space as far as I am concerned:  The shots of the space craft careening wildly through space seem hokey in comparison to the eerie progression of Kubrick’s machines.

Brave guys, those astronauts, and incredibly skilled and cool under pressure.  That’s how they picked ’em.  And the presentation of the work of the engineers on the ground was fascinating:  the technology they had to work with is left in the dust by what a kid carries in his pocket today.   And the need to have thought out every contingency in advance, to have provided the pilots with manuals and pre-printed algorithms for calculating things that today a pocket calculator could do in a flash, and the enormous technical bureaucracy that supports this was nicely shown.

But maybe I’m the prisoner of my profession here.  I’d heard of the sequence in which the engineers figure out how to improvise a replacement air filter to keep the pilots alive as a thrilling and brilliant passage, but it seemed to me that they figured out the problem exactly the way you’d expect a bunch of committed, smart engineers to do it.  Engineers love to jerry rig stuff just to get it working.  It’s called ingenuity.  Still, you do get the sense that it took guts to think they could carry this sort of thing off.  And for what?  To show the Russians, of course.

The film endorses the heroic view of NASA, and seems wistful that the public lost interest after Armstrong walked on the moon.  The reduction of the program by budget cuts is presented as a foolish tragedy of policy myopia.  Lovell justifies continuing the program after Armstrong by asking what would have happened if no one had followed up on Columbus’ voyage.  Well…ask a Native American that question… Lovell believes it though, and one of the more affecting moments of the film is when he realizes he will never walk on the moon, and we see his dreams of what it would have been like.

There’s hardly any relationship between the moonshots and 1492, however, other than the skill and courage of the men involved. Columbus sought land, gold, and slaves.  Lovell sought personal and patriotic fulfillment.  The justification for NASA after beating the Russians was only science, and robots do more of it better, and far more cheaply, without heroics or tragedy.  We have enough of that on Earth anyway.