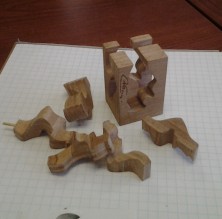 The fórcola is the strange looking oarlock on the rear of a Venetian gondola.  One of those objects whose form reflects centuries of use and gradual design evolution. In a little shop selling toys and ornaments, I bought a 3-D puzzle of one from a friendly and talkative craftsman who told me that this particular design is a fórcola for a boat that is somewhat more sporty than a regular gondola.

For me, it’s the perfect souvenir.  It sits on my desk at the office, and I take it apart and reassemble it endlessly as I sit in my chair, barely listening to the droning voices during pointless teleconferences. 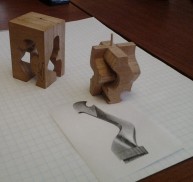 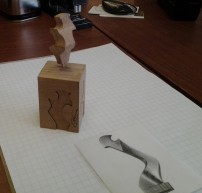 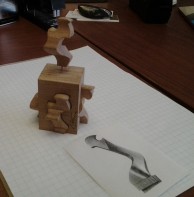 I just purchased this resin figurine of the mysterious bird-postman in The Temptation of Saint Anthony by Hieronymous Bosch.  It came very nicely packaged with minature folding reproduction of the complete triptych, inside and out!

The Kitsch-mavens, e.g., Gillo Dorfles etc., say that all transposition of art from medium to medium is inherently kistch, or at least risks it mightily.  Mona Lisas on bath towels, Venus de Milos in plaster replicas with ashtrays, collectible procelaine minature versions of scenes from the Old Masters…all kitsch.

Ich bin ein kitschmench?  Is there anything inherently kitsch in my enjoyment of this tchotchke ?  I think not.  I study art history, and I like it! There is no confusion in my mind about the relationship of this figure to ART and the works of H. Bosch.  I just think it’s really cool!

Check out the others avaialble at Parastone. 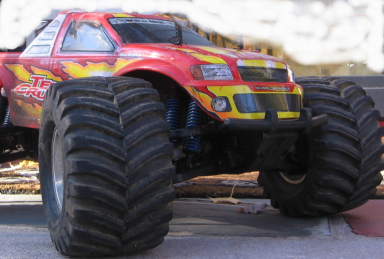 No, I am not talking about Thomas Pynchon. (Mindless Pleasures was his original title for Gravity’s Rainbow.) I mean my Terra Crusher , nitro-fueled, radio controlled, 4-wheel drive, two-speed, monster truck that is finally up and running again. It has a new engine with a pull start. If you want to know what this all about, watch this video. No, mine no longer runs in reverse – that went out with the old, destroyed engine, but that’s a small matter. This truck, for me, is one of those things I dreamed of having as a boy, and now that I do have one, it’s every bit as good as I thought it would be. How often does that happen?

When I was a boy, I was interested in car racing. I recall hearing a discussion between an older boy and his father in which the son complained that car racing “fucked up the environment.” Even as a kid, I thought that was a tad harsh. Pretty small potatoes, pollution-wise, a few hundred cars running like crazy for a few days a year. Still, I guess, if that’s what you concerned about, it might seem very retrograde to be into automobile racing…incorrect, as they say these days.

I enjoy my fume spewing screaming vehicle without guilt – only a toy, and I have absolutely no interest in full-scale monster trucks. In fact, they struck me as idiotic. Let’s hear it for the amazing aesthetic effect of miniaturization!