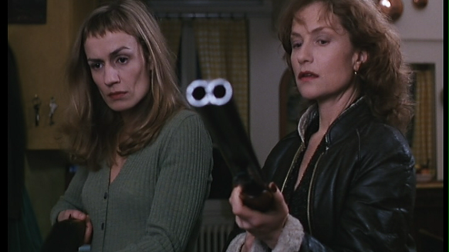 Two women, two misfits, two people with something shady in their past lives.  The maid (Sandrine Bonnaire) cannot read, and is intensely ashamed of it.  She makes herself into a cipher so as not to be found out, but there’s something terrible bubbling beneath, and a criminal deed in her past…maybe.  They couldn’t prove anything.    The postal clerk (Isabelle Huppert) seems to never have been properly socialized – she’s just this side of out of control.  Did she kill her young child by abusing her?  The judge said there was no proof. They fall in with one another, recognizing each other as soul mates, and form a Platonic bond.  Together, their resentment of the local patron, the maid’s employer, and his comfortable bourgeois family becomes something terrible.

Claude Chabrol jokingly called his film La cérémonie, made in 1995,   “the last Marxist film.”  Some of his fans could learn something from his sense of humor.  Consider this exceprt from a review that insists on extracting a class-conscious moral from the story:

In La cérémonie, the characters’ latent sexualities may insidiously be equated with evil, but this evil remains immeasurably more moral than the hypocritical and hierarchical society it attacks.

Chabrol is certainly intensely aware of class divisions, and he weaves  them with great effect into this chilling tale, but his vision is nuanced and subtle rather a simple conflict or classes and relative immoralities.

The title of the film is slang for being lead to the guillotine for execution, a state ritual of justice, adding a further touch of irony and ambiguity as the film moves with heavy stateliness towards its blood spattered conclusion.  The force that drives the violence is not ideology, but evil and happenstance.   The massacre is a crazy stunt that gets out of hand, or maybe it was inevitable, but that is taken in stride once it comes about.  Surveying the bodies, Huppert’s character says, “That’s well done.”  “You know what to do now.  Call the police and say you found them like that. They won’t be able to prove anything.”  The state doesn’t protect the good bourgeoisie from these looneys any more than it protects workers from the predatory owning class. 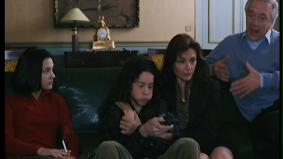 And what of this bourgois family?  They’re not a bad lot.  They are fair.  They pay well.  They are very loving to one another.  Maybe a bit full of themselves and a bit too used to their great advantages, but not a bad lot after all.  They certainly don’t want to hurt anyone.   Is this hypocrisy?  Does the fact that the father owns the local factory make him a ruthless exploiter?  Nothing would indicate that.  He is almost the ideal bourgeois.  It’s true, however, that servants can be such a pain in the neck!  And they definitely should know their place.

This theme of the bourgeoisie is such a terribly important theme in European culture that it can be puzzling for an American.  Here, everyone is middle-class.  Of course, bourgeois is more than a term for a group with a certain income:  it has very deep and wide connotations in Europe.  They are on full display in La cérémonie.

Another film also intensely involved with class dissection is Bernardo Bertulluci’s Before the Revolution of 1964.  I thought I detected an homage or allusion to that film in this sequence from Chabrol’s:

During a party, the young girl passionately makes out with her boyfriend – the camera pans away to the next room where the boring chit chat among les adultes continues.

In Before the Revolution, pop music blares from the radio, the old man leaves with his newspaper:  Let’s dance, shall we? …Ah, look – she’s asleep!

The man and the woman in the extremely sexy passage are aunt and nephew:  after all, the movie is very loosely based on Stendhal’s novel, The Charterhouse of Parma.

This entry was posted on Tuesday, February 23rd, 2010 at 8:44 pm and is filed under Uncategorized. You can follow any responses to this entry through the RSS 2.0 feed. You can leave a response, or trackback from your own site.

10 Responses to Class conflict, anyone?